Uta Staiger, Christina Pagel and Christabel Cooper share the results of the last UCL survey (with fieldwork conducted by YouGov), which was generously funded by UCL Maths, UCL CORU and UCL’s Grand Challenge of Cultural Understanding. The data shows that with No-Deal now leavers’ preferred Brexit outcome, ruling it out could create problems for the Tories. Leave voters are also relatively untroubled by the economic impact of no-deal – in fact more are now worried about the negative impact of leaving with May’s existing deal.

This week MPs narrowly voted through the Cooper-Letwin bill, which aims to rule out the option of leaving the EU without a deal. New research from University College London shows that this may be in line with voter preferences, with the country as a whole seeing no-deal as the worst possible outcome of the Brexit process. But it also reveals the depth of divisions between voters, with those who voted Leave in 2016 strongly preferring to exit with no deal.

The UCL survey (with fieldwork conducted by YouGov) asked over 5,000 representative UK voters at the end of March to rank four Brexit outcomes in order of preference and found that Leavers now prefer no-deal to all other Brexit outcomes: 53% of Leave voters ranked it number one – more than twice the number of those who favoured Theresa May’s Withdrawal Agreement or a softer Brexit. Indeed, no-deal was the preferred outcome of Leave voters from every socioeconomic group, every level of education and employment status, from all regions and across supporters of all main political parties. The only significant group of Leavers who did not prefer no-deal were those aged under 30. 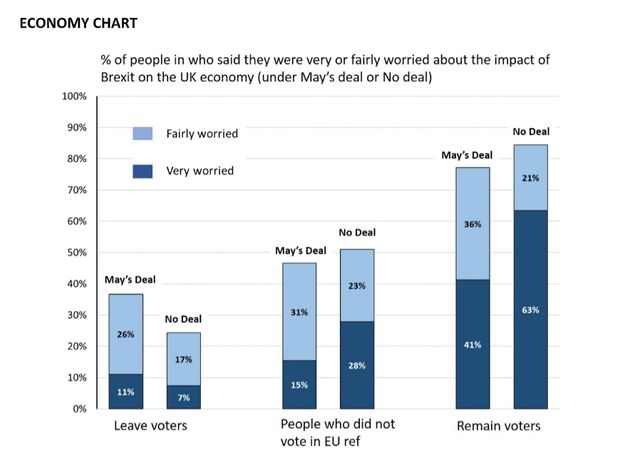 However, support for no-deal is being disproportionately driven by those who would probably be least affected by its consequences. The more financially secure Leave voters were, the research suggests, the more they supported a no-deal outcome and the less they worried about its impact on the economy. 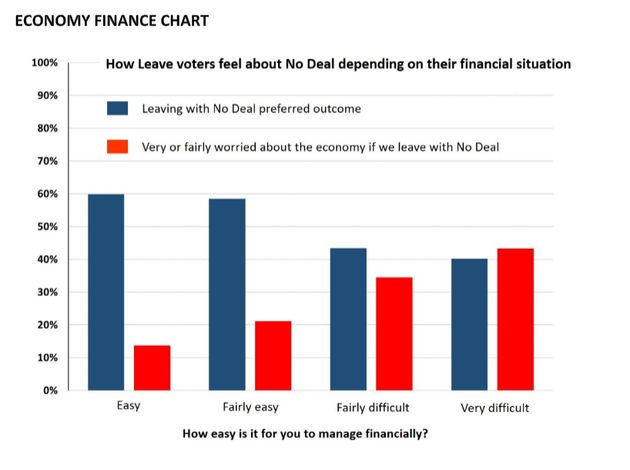 The survey also highlighted other potential reasons for why the no-deal option has become so popular among Leave voters. It asked what voters felt were the most important challenges facing the UK in the next five years and found that the top priorities for those who voted Leave are now all about sovereignty which was ranked above ensuring strong economic growth and limiting immigration. By contrast, the economy and a range of domestic issues such as housing, jobs and public services were most important to Remain voters. In addition, the survey found that for Leave voters, sovereignty means above all returning the control of laws to Westminster and ending EU bureaucracy.

The Withdrawal Agreement does address some of Leavers’ concerns, notably by ending Freedom of Movement and would also stop the UK’s payments in the European Union budget (third on Leavers’ list of sovereignty priorities). But Theresa May failed to highlight these points and in the end this does not seem to have compensated for the potential loss of sovereignty implicit in the withdrawal agreement. EU law will continue to have significant influence on the UK during the transition period, or well beyond it, as the fallout over the ‘backstop’ has signalled. But having failed to explain the inevitable trade-offs of any agreement that seeks to maintain frictionless trade, particularly across the Irish border, the credibility of the government – and its deal – has suffered. In the meantime, Theresa May’s long-standing assertion that ‘no-deal is better than a bad deal’ has likely legitimised no-deal as a viable option.

In an environment where there is already considerable mistrust of politicians (particularly among Leave voters), seeing Parliament rule out their preferred outcome could have profound political consequences. The is particularly true for the Conservative Party where 44% of their 2017 voters ranked no-deal as their preferred outcome, compared to 15% of Labour voters. Ruling out no-deal may be in line with the wishes of the country as a whole, but the deep divisions between Leave and Remain voters may well create problems for the political parties in the future.

Uta Staiger is the executive Director of the European Institute at UCL.

Christina Pagel is a Professor of operational research at UCL.

Christabel Cooper is a data analyst.

This post was originally published by the HuffPost and is reposted with permission.

Results of the survey can be found here: https://d25d2506sfb94s.cloudfront.net/cumulus_uploads/document/vwj42ojs63/UCL_Brexit_190326_w.pdf